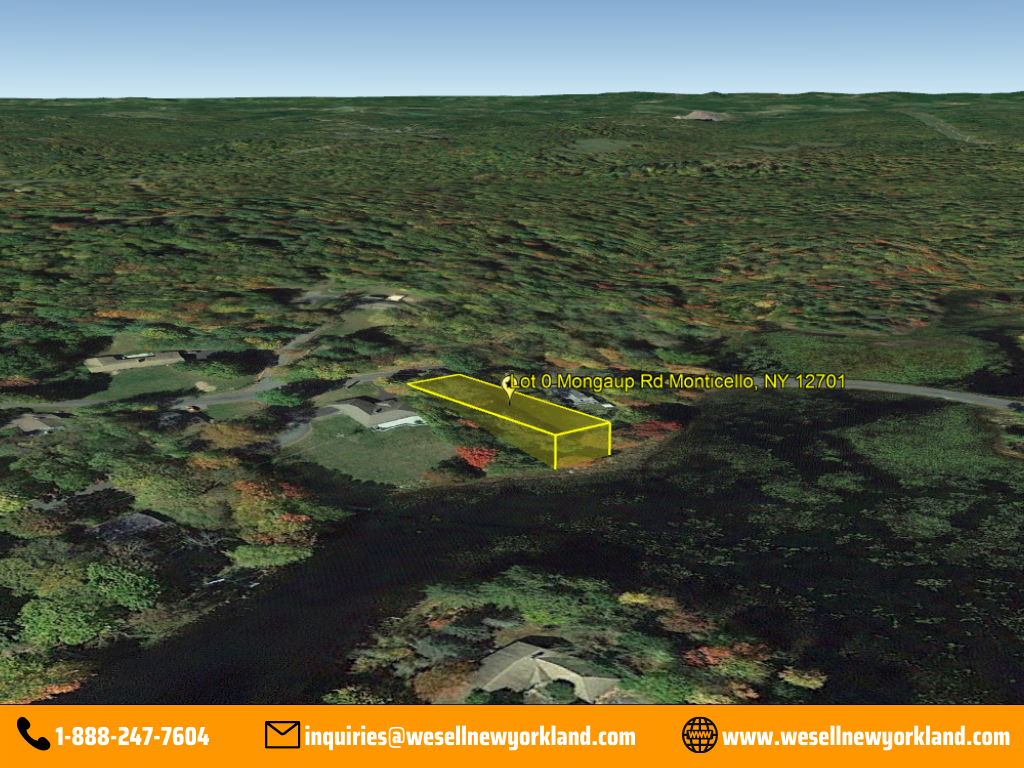 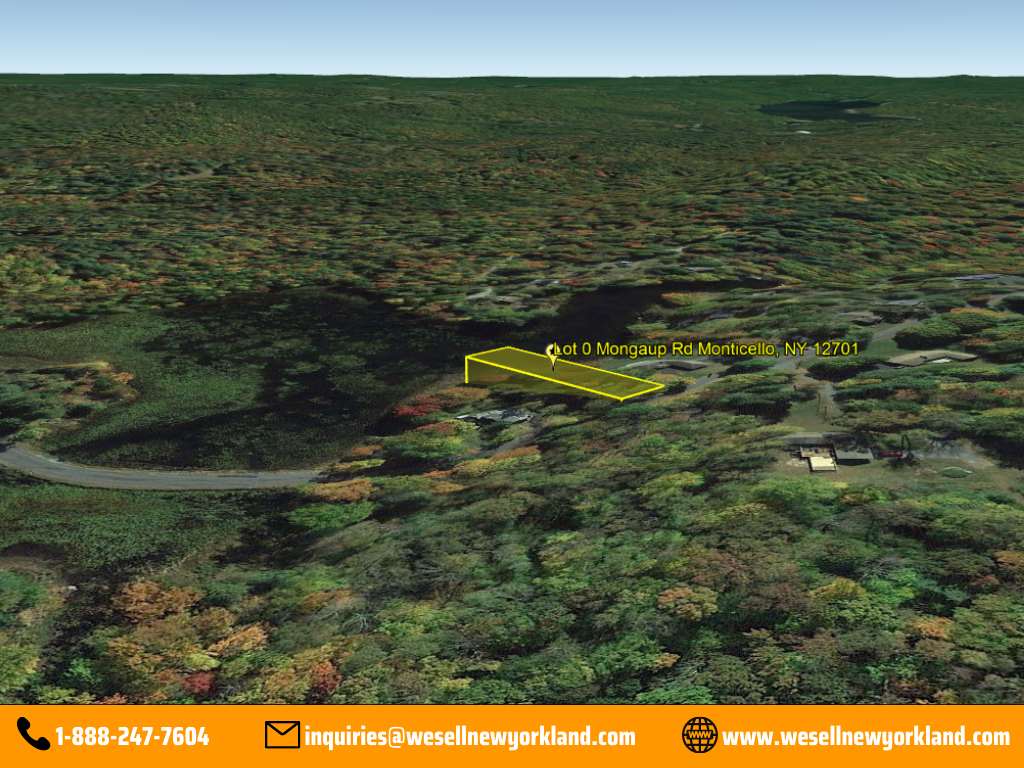 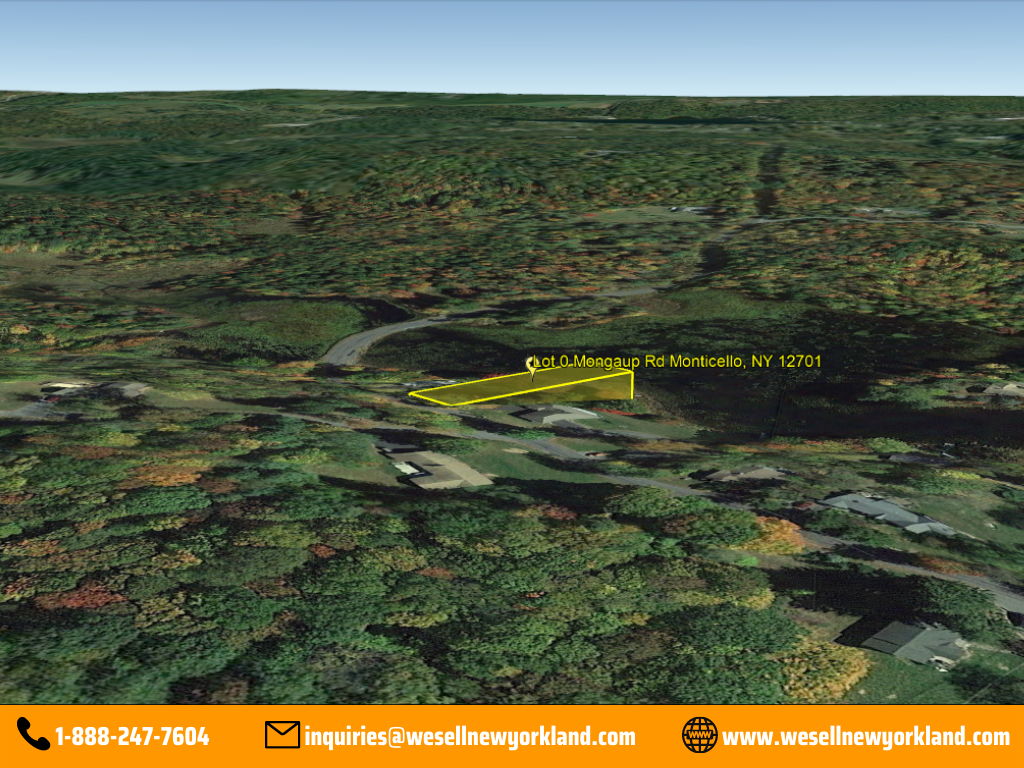 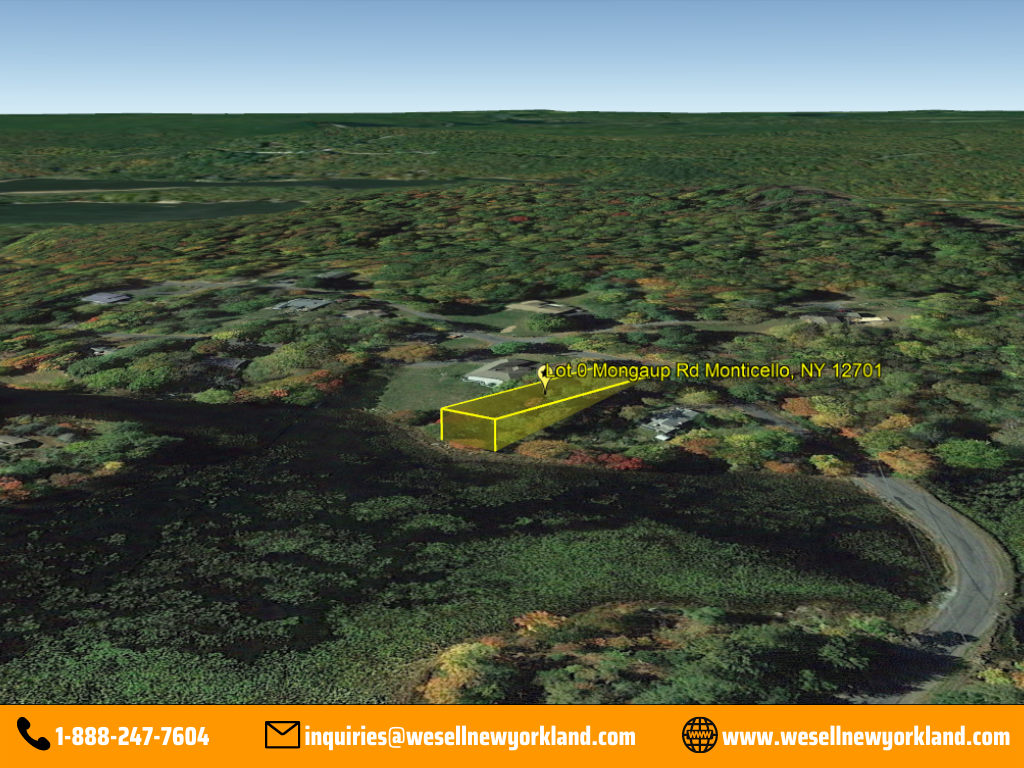 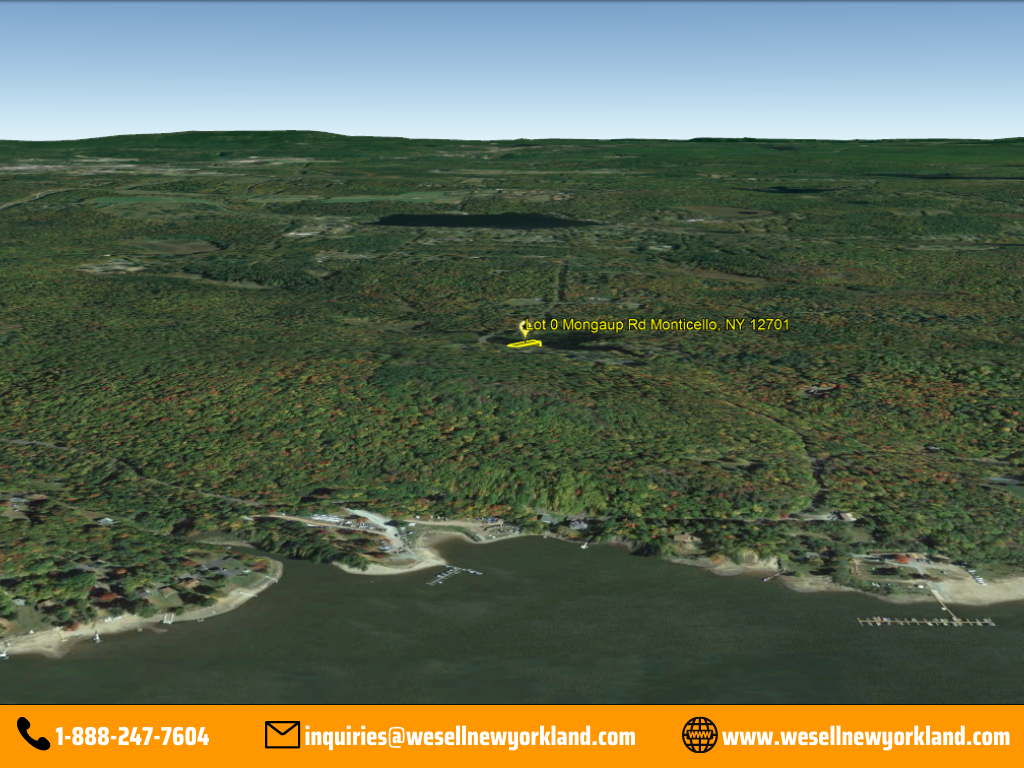 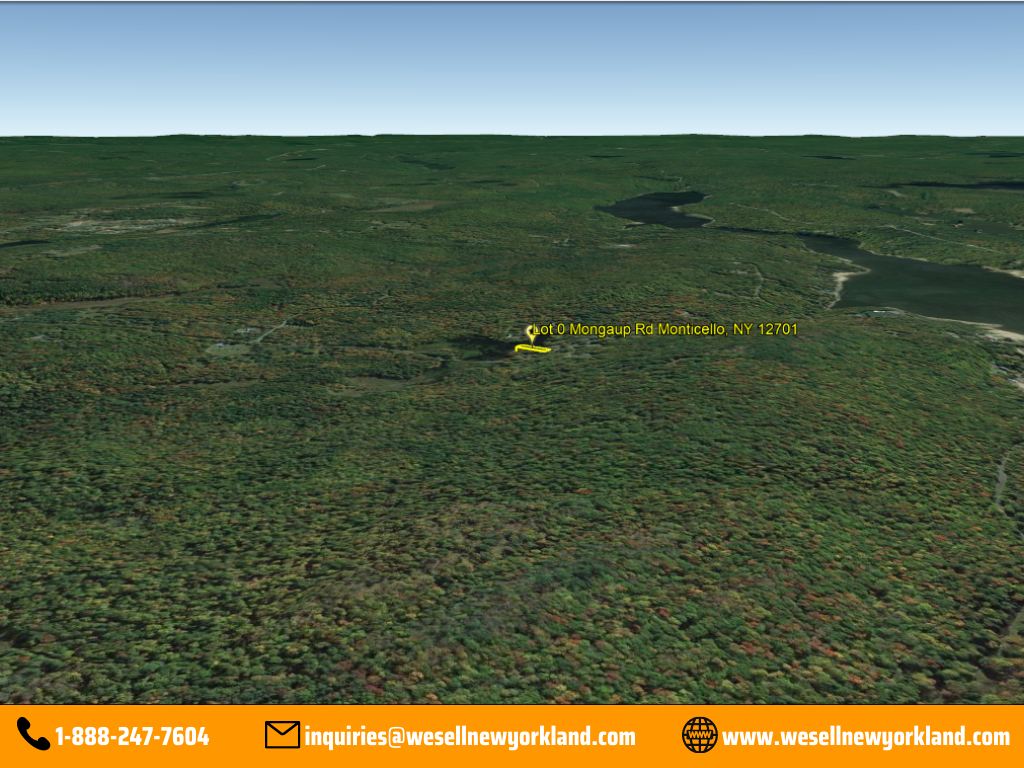 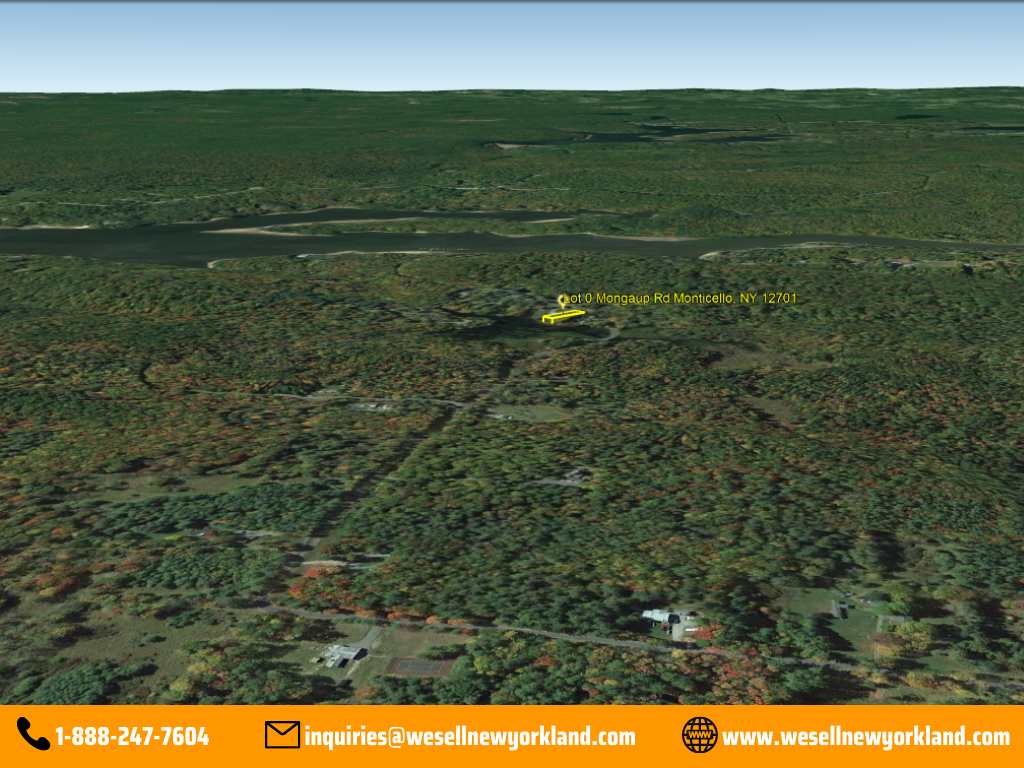 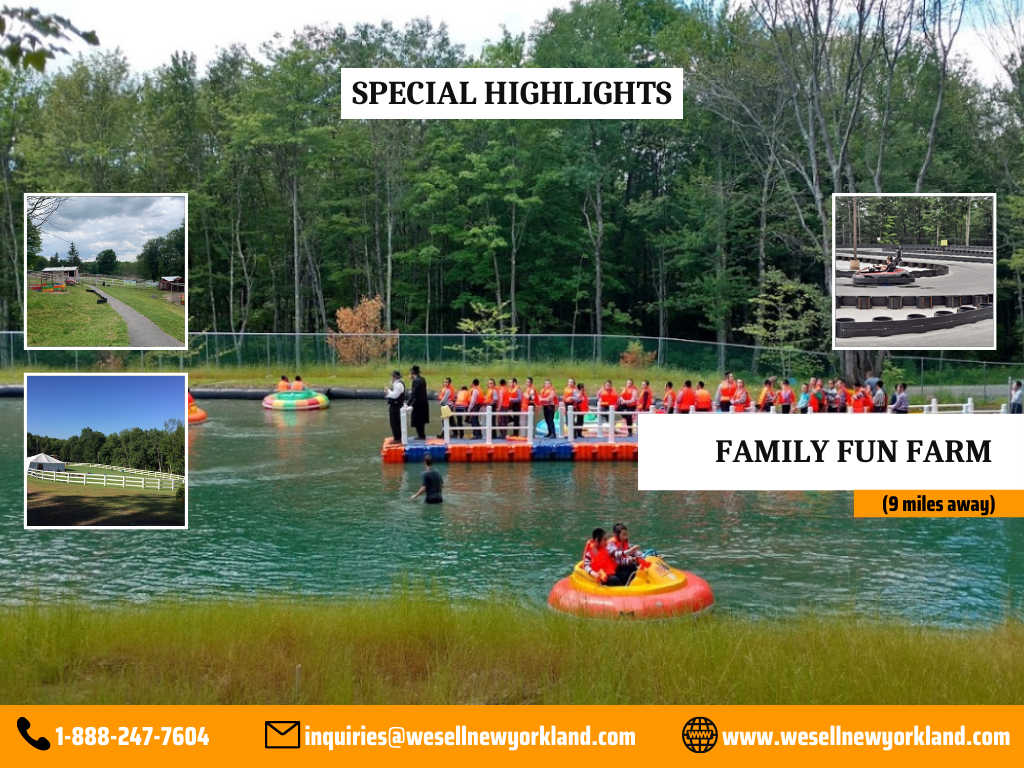 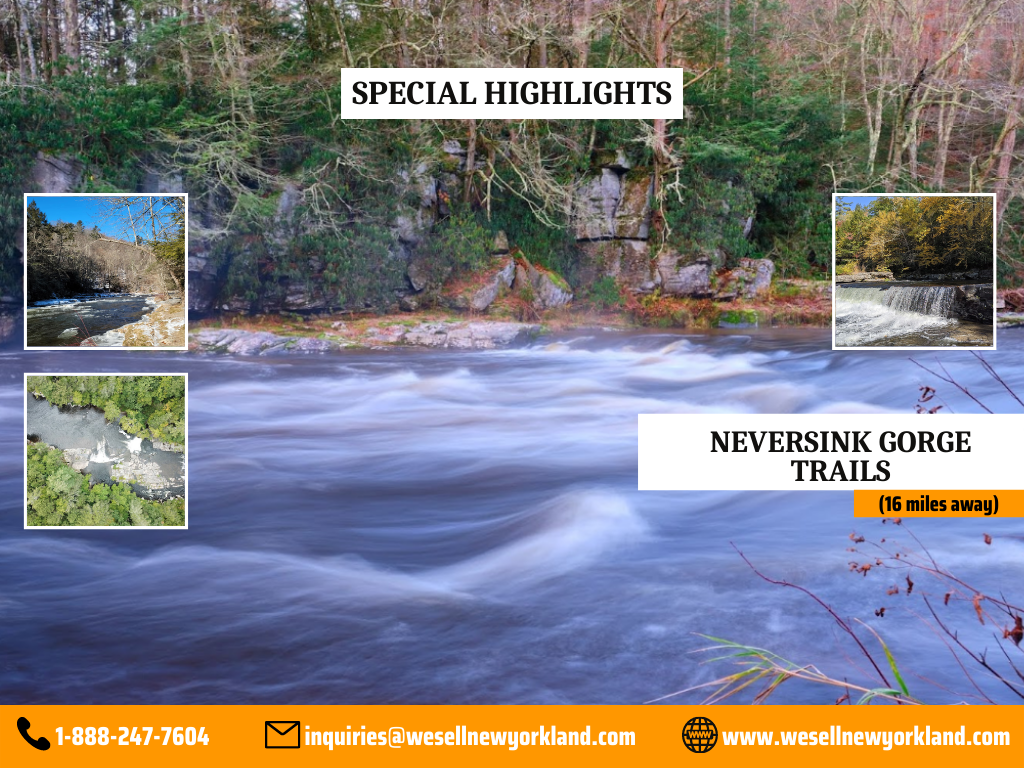 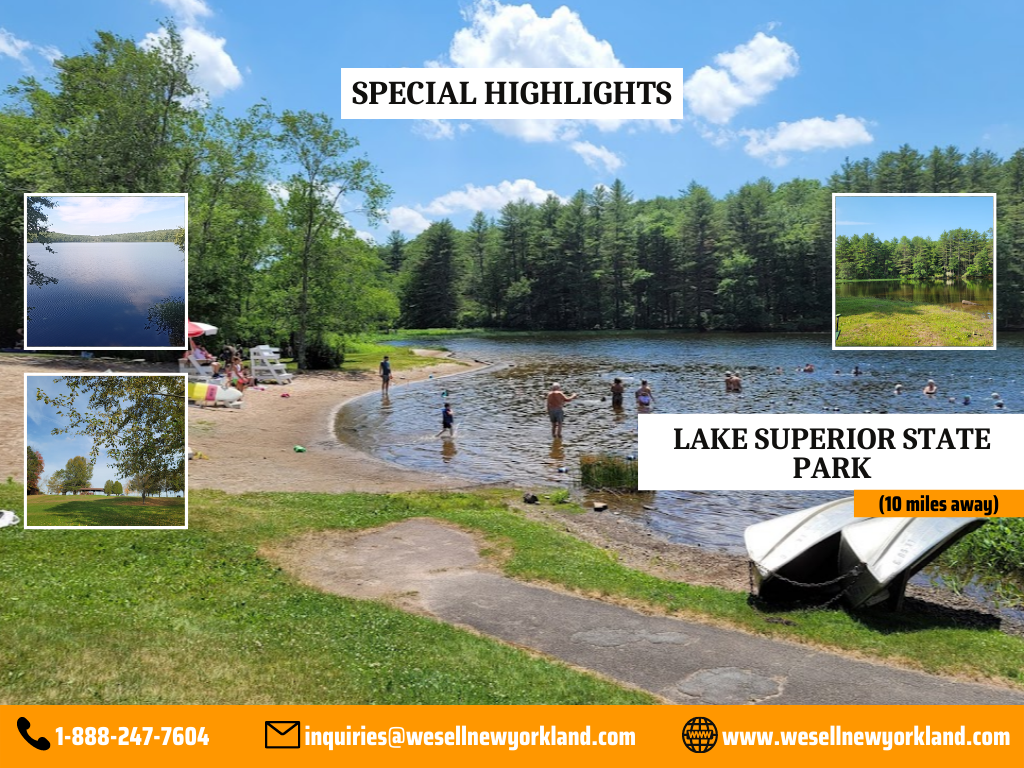 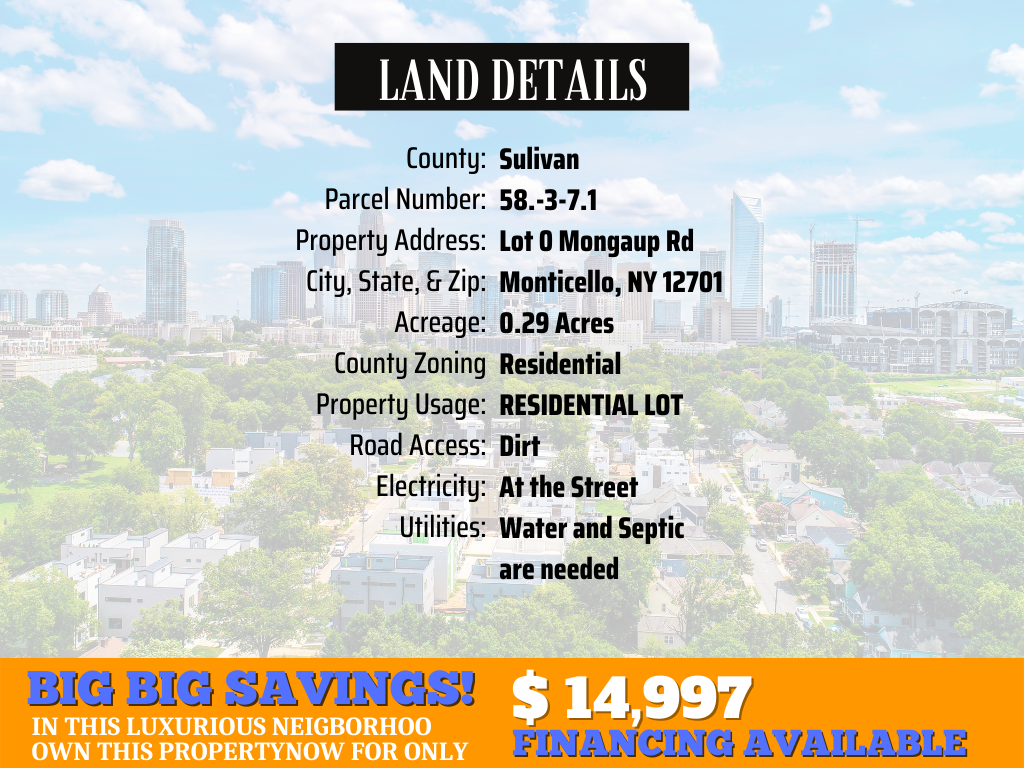 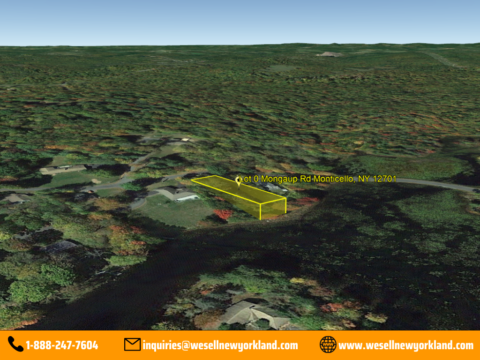 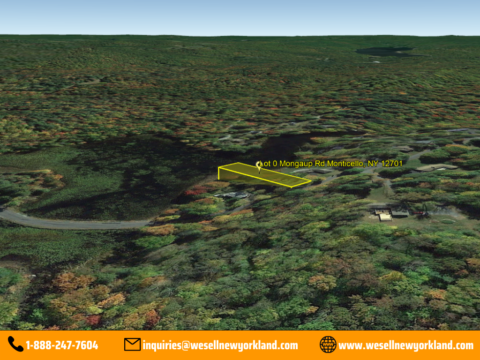 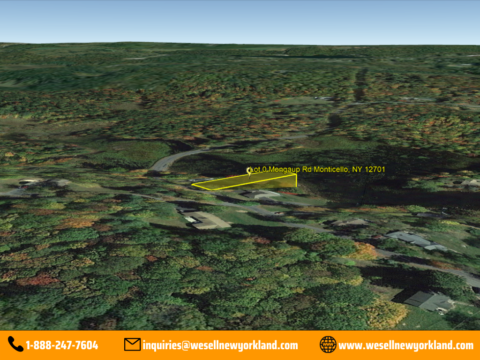 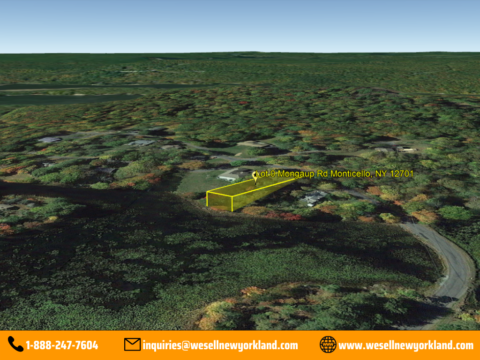 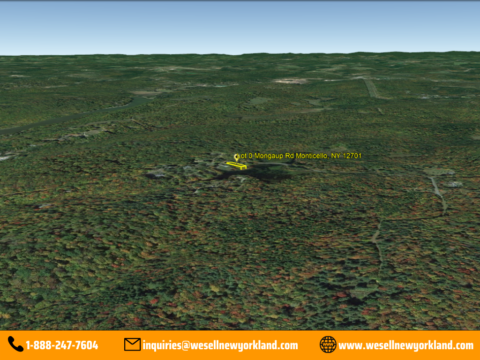 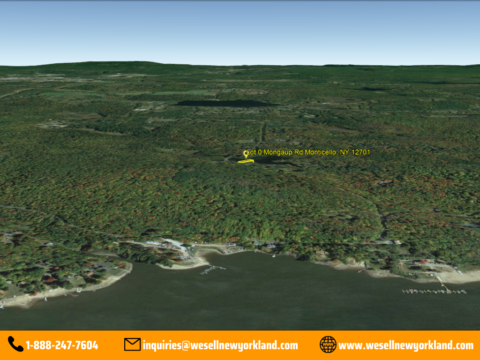 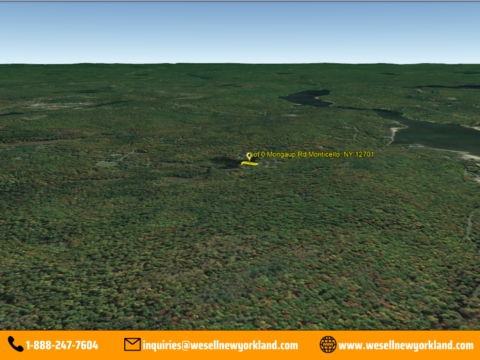 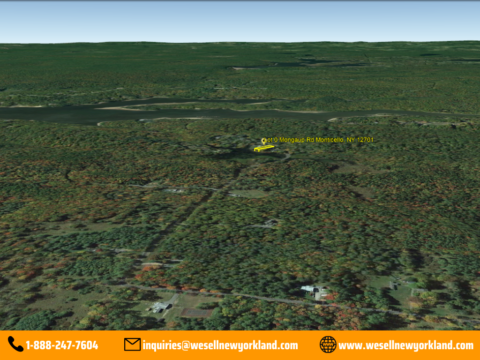 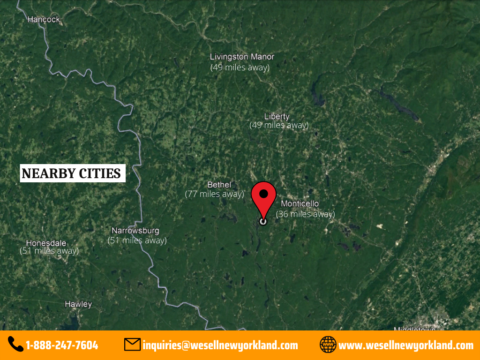 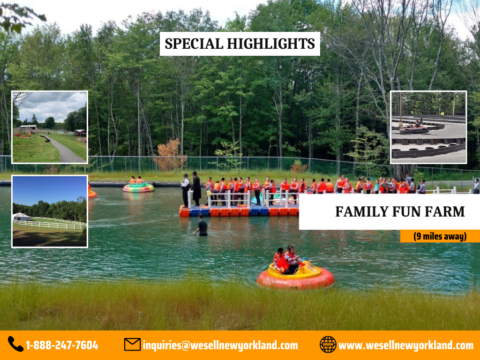 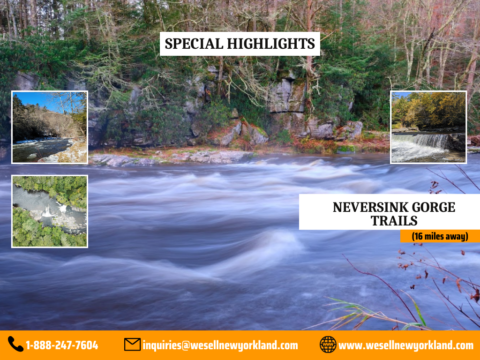 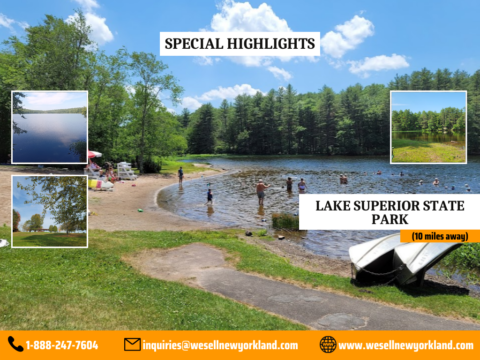 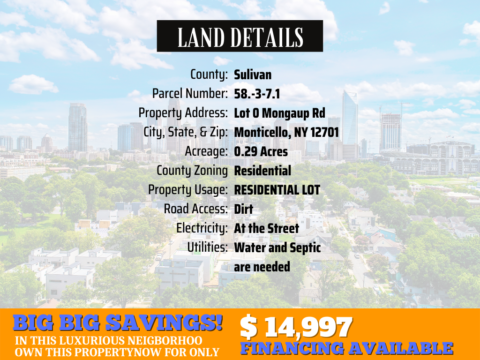 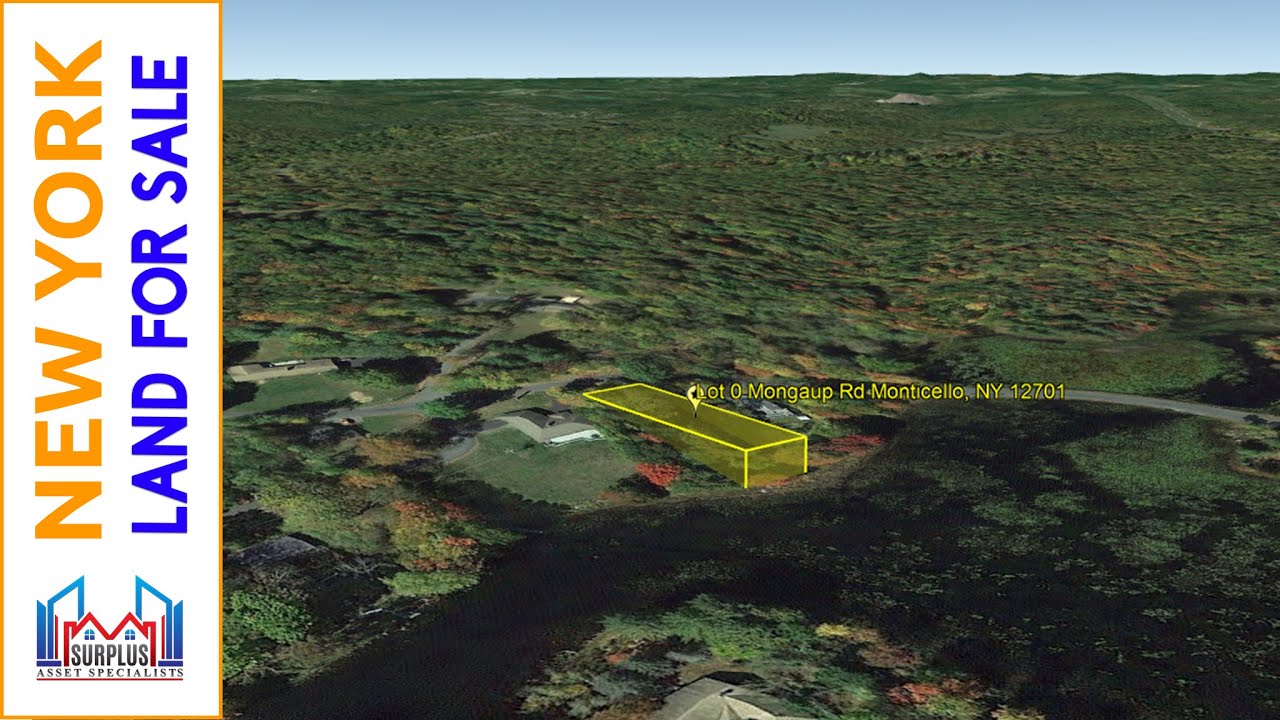 Check out our affordable payment options below…

NO PRE-PAYMENT PENALTIES for Paying the Balance in Full At Any Time.

*This deposit is fully refundable within 48 hours – Buyer Protection Guarantee

Land for sale in Sullivan County, NY is An Awe-Inspiring Waterfront Retreat: Lot 0 Mongaup Rd Monticello, NY is where you can start building your dream home on the waterfront and live side by side with nature. Your new property also sits in the middle of a water-rich region dotted by sparkling bodies of water, rolling rivers, luxuriant green foliage and is an ultimate location for various indoor and outdoor activities.

Quiet Location for Your Dream Home: In Sulivan County, Lot 0 Mongaup Rd Monticello, NY is an address you’ll enjoy the utter serenity and wake up to the melodious orchestra of birds and the gentle kiss of the morning breeze you’ll cherish over again for your vacation destination or year round residence. Every colorful season will remind you of what it feels like to be a kid again because the symphony of nature slowly reached its epilogue as the twilight dawned, reminding yourself to unwind after working all day long.

Secure Your Monticello, NY Address Today: Lot 0 Mongaup Rd Monticello, NY, Unravel the beautiful gem, where Lake Superior Park 10 miles away, Neversink Gorge Trail is 16 miles away from the property, get lost in the humongous verdant trees and deer tracks. You can go hiking, biking, swimming, camping, and everything in between.

DRIVE-BY ANYTIME… Take A Tour, You Won’t Be Disappointed.

Sullivan County is a county in the U.S. state of New York. As of the 2020 census, the population was 78,624. The county seat is Monticello. The county’s name honors Major General John Sullivan, who was labeled at the time as a hero in the American Revolutionary War in part due to his successful campaign of genocide against the Iroquois

Sullivan County is in the southern part of New York State, southeast of Binghamton and southwest of Albany. It is separated from Pennsylvania along its southwest boundary by the Delaware River.

The county, which starts about 70 miles northwest of New York City, is in the Catskill Mountains. Its northeastern corner is within Catskill Park.

The highest point in the county is a 3,118-foot (950 m) peak unofficially known as Beech Mountain, near Hodge Pond, a subsidiary summit to Mongaup Mountain across the Ulster County line. The lowest point is along the Delaware River.

Monticello is a village in Sullivan County, New York, with a population of 6,476. The total cost of housing, food, child care, transportation, health care, taxes, and other necessities for a single adult in Monticello is $38,958 a year — less than the annual cost of living for New York of $46,110 and roughly in line with the national figure of $38,433.

Monticello is a village located in Thompson, Sullivan County, within the Catskills region of New York, United States. The population was 7,173 at the 2020 census. It is the seat for the Town of Thompson and the county seat of Sullivan County. The village was named after the residence of Thomas Jefferson

This is the cheapest lot you can find in this area, which is listed Click Here to view

Closest Community/City To The Property: Thompsonville

Utilities: Electricity is available in the area.

Disclosure: The owner has not visited the property and is not aware of the overall condition, and may require permits, surveys, or zoning changes. This is a free & clear parcel with no liens and taxes are paid to date.

We cannot provide suggestions, or advice in regards to your purchase and buyers should do due diligence on property conditions, permits (if applicable), surveys, or zoning prior to purchasing.

This property has been discounted and being sold “AS IS” without any warranties or representations of any kind or character, express or implied, with respect to the property.

If you need assistance determining a fair purchase price, or have questions with regard to the conveyance of title, please contact a local real estate agent, use third party sources including but not limited to appraisals or the county departments the property is situated for more information.

All information provided is deemed reliable but not guaranteed. It is the buyer’s responsibility to intend to complete the purchase by doing your due diligence researching the title and confirming the property listed is actually the one you want to buy prior to putting in an offer because all sales are final.

Talk To An Expert

Receive A Callback and Learn More About This Listing.

Talk To An Expert

Receive A Callback and Learn More About This Listing. 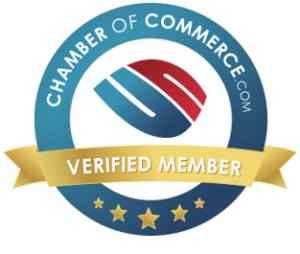 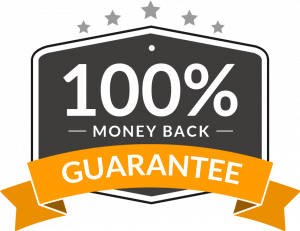 “Good People and Property Made Easy”

“This is a most amazing and wonderful opportunity for those with the time and resources to take advantage of the program this company has to offer. This is something that allows people to realize their dreams without the complication of 30 year mortgages.”

I had a ton of questions, and she answered them…

The best thing I can say about Chantel is that she was able to answer all my questions. As a first time land buyer I had a ton of questions and she answered them day or night.

I was able to get my property for much less than market value and the process of their no credit check financing program is incredibly simple.

They are good at what they do and are very knowledgeable in real estate. I would highly recommend them

“This is an awesome business and I will be investing again!!“

Shout out to Chantel she was amazing with answering my questions and making me feel comfortable with these online transactions! Thanks a lot!

I had the pleasure of working with Chantel while purchasing a piece of land as a gift to my husband.

At first, I was skeptical because the process felt too easy. Chantel encouraged me to do my own research, and was still available for any remaining questions.

I would definitely do business with her again and send others her way. She was kind, honest, worked fast, and always professional.

It was so nice dealing with Miss Chantel Gabriel the representative of the company for the purchase of my land.

Was a nice deal and so easy ,she is so nice and experienced in the business. Did everything right over the phone so easy.

I’m very satisfied with the purchase. I have no hesitation in recommended her to anybody in the purchase of land. She is very nice and well knowledgeable in real estate business.

Thank You, Chantel God Bless you

“Within 3 days we had the deed in our hands…”

I did a google search land for sale by owner and came across this page. We were looking for hunting property, something simple and affordable.

We placed a deposit that we could cancel in 48 hours. I called the town to verify the owner of the property and it matched up to my deposit receipt. We felt comfortable, so we decided to move forward with the sale.

Within 3 days we had the deed in our hands. Chantel was wonderful to work with, she answered our questions immediately. I was able to reach her by phone and text, she made the experience stress free.

The process was so nice we plan on making another purchase if the right property comes along. Definitely would recommend Chantel at We Sell New York land!

“These guys definitely have a passion…”

“These guys definitely have a passion for what they do and you can tell that they love their job and the services they provide.”

“So simple and informal from the privacy of your home..”

“I love doing business with Surplus. So simple and informal from the privacy of your home. Very professional and trustworthy. Real Estate has never been so simplified.”

We’ve had overall a great experience working with Chantel and Surplus Asset.

We did have issues with banks on both sides out of the control of both parties, but they helped tremendously.

We would highly recommend Surplus Asset Specialists and definitely would buy land from them once again!

Thank you for a great first time buying experience.

“I would not hesitate to buy from your…”

“I would not hesitate to buy from your company again as you guys are an honest company and thank you so much.”